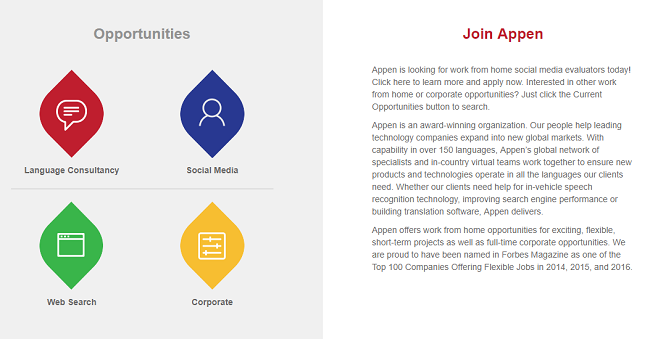 Appen is a respectable online work-from-home company that handles digital projects from big tech companies like Google. Appen hires independent contractors to work on temporary projects they have available. If you are reading this review, it probably means that you have an interest in applying to Appen. So, I’ll do the best I can explaining my own experience working with Appen. Please note that I do not have anything against Appen, I just wanted to be as honest as I can.

I was hired by Appen as an independent contractor at the beginning of 2016 for a transcription project with an unknown end date. I was also hired on as an employee.

What I thought of being an independent contractor for Appen

I really don’t have any complaints about being an independent contractor through Appen. Everything pretty much met my expectations. However, at one point I was hired as an employee and it was the worst decision I’ve probably ever made (more on this later).

Here are some things to know if you are thinking about being an IC.

What I thought of being employed by Appen

I was hired as an IC through Appen at the beginning of 2016 on a huge project that ended up lasting all year. Besides the low pay, I enjoyed the steady stream of work to help keep me busy.

Towards the end of 2016, out of nowhere, I was contacted about becoming an employee to stay on with the project. I was told that if I did not become an employee, I would no longer get to work on the current project. They also listed the incentives like PTO (Paid Time Off), paid holidays, even full benefits for employees!

I had a gut feeling that I shouldn’t agree to become an employee, but I really enjoyed the project I was on. I figured if they were having me become an employee, this project is probably going to last for quite a while. So, I decided I would sign the contract. Unfortunately, this is when things went downhill.

Work was put on hold while our team was getting into the new time sheet system (this means no pay). HR (Human Resources) was sending us all the important employment documents and everything else to fill out. Everything seemed like it was going smoothly. I read through all documents and whatever else was thrown my way. We were receiving instructions on how to use/log-in to this or that, along with important details pertaining to anything else we needed to know. I received information and updates from both HR and the project manager. This is where I first started noticing problems.

We would get different information from different people that would somewhat contradict what the other person said. For example, I became an employee right around the November/December months (a lot of paid holidays). It was made clear that PTO and paid holiday hours are based on your contracted hours. If you are contracted to work 40 hours per week (full time), you would get a full day of pay, or 8 hours. If you were contracted to work a max of 20 hours per week (part time), you would get half a days pay, or 4 hours.

Issue #1 – My contract stated that I could work a max of 20 hours per week. We were clearly told by HR how many hours we can take for PTO and paid holidays. That means I was allowed to take 4 hours (paid) for those days. The confusing part was our project manager would then tell us to take 8 hours for those days. So, who do we listen to?

Issue #2 – At the end of January 2017, I received an email from the project manager who thought some of us had errors in our contracts. We were supposed to be contracted for 40 hours (full time) per week, not 20 hours (part-time) per week that I was currently working. This explained a lot!

Issue #3 – At the beginning February 2017 I asked my project manager if I could schedule 2 days of PTO (we had to get it authorized). The manager said he had to forward the request to his manager and his manager had just mentioned that my hours were low. I explained that my contract stated that I could only work 20 hours (max) per week and I was trying to get more hours in per week after we were told that we can work a max of 40 hours (max) per week.

The manager said he figured that was the case but they didn’t know which of us had the errors in our contracts, so they couldn’t confirm that for sure. I was slightly angered because, for one, I wasn’t lying. And two, he made me feel as if I were lying. Lucky for me, I’ve kept all emails Appen sent me – and I sent him the contract I signed. The contract that clearly stated that I was to work a max of 20 hours per week. He never responded. I’m not even sure if I got the PTO… I just can’t believe HR didn’t keep these contracts for their records… Or maybe they did and the project manager just didn’t care.

Issue #4 – HR made an unbelievable amount of errors – and it’s a scary thought because they are the heart of the company. Besides the contract fiasco, I started seeing the incompetence when they would send me an email and about a week or two later they would say that was wrong information. I basically got in the routine of disregarding what they told me because I knew soon after that I would get an email correcting the information.

Issue #5 – Just a couple months after becoming an employee, the work coming in for the big project I was working on was noticeably slower. The project manager was even trying to get us on new projects to give us some work to do – because remember, no work = no pay. The amount of work we were getting was shaky. It was clear that we wouldn’t even have enough work to be making our contracted hours for each week. We got put on very small projects but even that wasn’t enough.

Then it happened – At the beginning of May 2017 I was told that my contract would not be renewed. I would no longer be needed as an employee. What irritated me was the fact that I worked on the main project for almost a year as an independent contractor then said I had to either become an employee or leave the project – only to have the project end shortly after I’m hired on as an employee. That did not make sense to me. Not only that – but by the time my paperwork for full benefits went through, I ended up having them for less than 2 months.

Issue #6 – Shortly after the official employment ended, our project manager started us on another project as independent contractors. About a week later we were told we can’t continue the project because of “legal issues” regarding our employment with Appen. Since then I haven’t heard anything. I will update this if I do…

If you are considering applying with Appen, just stick to independent contracting work. I had no issues with Appen until I became an employee – it was a nightmare. I hope this review helps answer any questions you might have about Appen. If you have any other questions just leave me a comment and I’ll answer to the best of my knowledge.